Tale of the Toad Part 3: Modifying the Toad

When we bought the SMART car that serves as our Toad, I knew it needed a battery disconnect for towing. "No Problem", I thought. Disconnects are cheap and easy to install. After we got the car, I discovered you have to have battery to lock/unlock the Toad. Smart is unique in that normally you only use the Fob to unlock the car. Using the key is considered an destructive emergency procedure that can only unlock the car.


This was double-plus-ungood. It was my intention to have expensive electronics in the Toad (GPS and a Ham Radio) as well as use it for storage when we were on the road. Another complication was the location of the battery: underneath the passenger seat. Since we didn't want the thing looted while we were inside Joe's Truck Stop, we had to figure out someway to switch the battery on-off while the doors were locked.


Fortunately through the good services of Google, we discovered that Intelletec makes a latching 12v relay. This relay toggles the battery on/off and latches so there is no battery drain holding the latch in position.


We then discovered a set of momentary contact marine buttons and keys that were waterproof. It would be more secure to have a key, but we've got too many darn keys anyway.


I was a bit concerned that road debris might slap the battery switch, but it is stiff enough that if anything hit us that hard, we'd be pulling over to look for damage anyway.


In the Smart, the passenger floorboard - a large chunk of foam - lifts out so you can service the battery. I decided to embed the relay in the foam - in retrospect a bad choice. If I had to do it over, I would put the relay in the battery compartment. 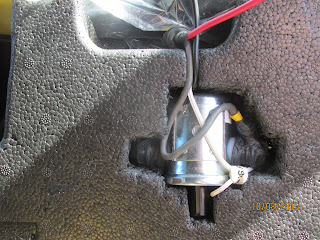 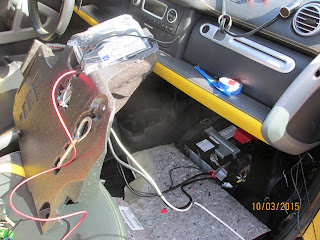 We wired it up and requested the base plate installer to route the wires for the switch and the trickle charger.

Tale of the Toad Part 2: Selecting a Toad

A good way to get a fight started in a RVers bar is to walk in and announce:  "Such and such makes the best toad!!"  The occupants of the bar will rise up in righteous indignation in defense - and in slander - of their favorite toads.

Motorhomers are passionate about their toads.  With good reason: they've spent a lot of time and effort getting those toads into towable condition - even to the extent of installing transmission pumps to keep the innards lubricated.

Naturally, some cars are better suited for toads than others.  Motorhome magazine publishes a very good guide to towed vehicles that is available on their website.
When we acquired our Motorhome, our fleet of cars include a mini-cooper and a high mileage Pontiac Vibe.  We learned that the Vibe (or Toyota Matrix) is not well suited for towing "4 down".  We briefly considered a tow dolly, but the logistics of carrying one around quickly dissuaded us from that option.  We also did not want to convert the mini-cooper for towing - at least at this time.
So we sat down and starting thinking about what we wanted in a toad:
So we eventually settled on two possibles:  A Ford Fiesta or a Smart Car.

The Ford Fiesta is a compact low end Ford that was cheap to buy new and  even cheaper on the used market.  It had a back seat that would hold a very uncomfortable adult.

The Smart by Mercedes Benz is incredibly popular in Europe.  It made a big splash here initially, but quickly faded out with bad press and reviews.  The Smart had such marketing issues that cars with very low miles (like 100) were being auctioned as used cars.  They were dirt cheap.  It has the advantage that the manufacturer explicitly states it can be towed.  It is also the lightest car on the market today.  It unfortunately only has two seats.

We looked at both, but in the end, cute  (and cheap) won. 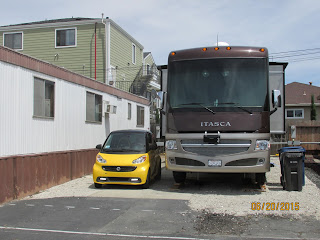 After all, it important for a Citizen of the Road to be cute....