We had our first overhead accident.

While trying to get into a gas station we went under a previously damaged canopy that had part of the roof dangling down. We heard two bangs, stopped and realized what was going on and then spent the better part of an hour manipulating the RV out of that gas station without causing further damage.

And we didn't even get any gas.

We pulled into a vacant lot and went up to see the damage. The satellite cover was stove in and the OTA TV antenna was at a weird angle.

Fortunately we were able push out the dents in the satellite dish over, but the OTA antenna was not quite so lucky. 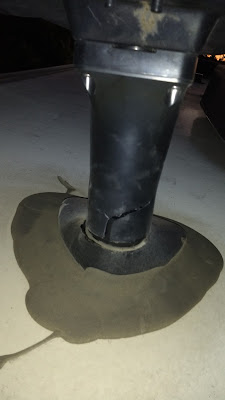 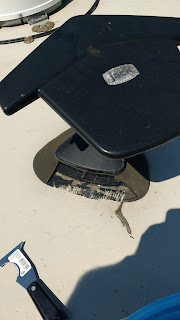 We shouldn't have worried - the old sealant just slid off with the knife.  In less than 20 minutes, we had the sealant off and the area cleaned up and the screws holding the antenna on the roof exposed. 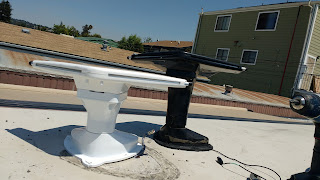 The new antenna is white since it doesn't make a lot of sense to male component of the team to have black heat holding components on the roof.  The above picture shows the difference in the heights of the antenna.  The new one is maybe 4 inches shorter.  That shouldn't make that much of a difference in the reception and we think it will be a heck of a lot less likely to get snagged by a tree limb. 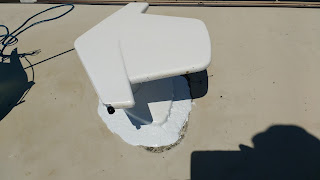 We used black rubberized roof sealant to a bead along the base of the antenna and then screwed it down.  The screw pattern was almost the same - where it was different it the holes were sealed and new ones drilled.  While waiting for the black seal to set, we went inside and hooked up the inside electronics.  We decided to keep the old electronics in place since it was identical to the new stuff.  While waiting for the black seal to dry, we fired it up the antenna and watched the Olympics.  Granted we are in an "RF rich" environment, but we could not see any performance degradation from our old antenna.

After it sat for a few hours we put final sealant on it.  This was the whole to tube Nu-flex 311 self leveling white sealant we bought from Winnebago.  We applied it all to the base of the antenna and true to the advertisement, it flowed out, onto the surface and formed a wonderful  water tight seal.

What we did right and wrong:

Posted by Jerald at 2:48 PM No comments:

Some relatives came out to escape the heat Arizona by staying at a small resort in Point Arena California.  Since we didn't think we could also stay there (turns out we could have), we planned an RV trip to the Manchester Beach KOA - about 5 miles north of Point Arena.

We looked at the map for the best road.  We knew it *was not* California 1 north of San Francisco.  That road is twisty-turny enough to challenge the mini-cooper.

Instead we chose US-101 North to Route 128 to about 20 miles north of Manchester Beach.
So we tried it.

The road is somewhat twisty and there are a couple of sections where there is a sharp drop to the side, but it was navigable.  Just not my favorite road.

We had a short jog on highway 1 south the Manchester Beach KOA.  The short jog on 1 was sufficient to reassure me that highway 1 and RVs do not mix well.  There was one 180 degree hairpin that a)  If there had been traffic on other lane we would have been screwed and b) I wasn't real sure the coach had enough power keep going up.

But, we made it.  The KOA at Manchester beach is a very nice RV park (aren't all KOAs?)
Point Arena Lighthouse is nearby and the very good and friendly Rollerville Café which claims to have the "Last coffee till Hawaii" lies on the road to the lighthouse.

Less palatable was the Bird Café and Supper Club in the town of Point Arena.

Overpriced - perhaps too sophisticated for my palate (and everyone else in our party of 6) and will not get a return visit from us.  Their wine was pretty good though.

We also toured the B. Bryan Preserve just outside of Point Arena.  This preserve is operated by a couple to try and preserve some species of Giraffes that are endanger of becoming extinct.  They offer tours of their operation riding around in vintage Land Rovers.  They also have zebras and other animals.

The highlight of the tour is the Giraffe kiss.  They give you a piece of vegetable to hold in your mouth and the great and gentle creature will reach down and take it from your mouth - giving you a gentle kiss.
We highly recommend this tour and good karma that comes from supporting these people in their cause.

The only other thing of note that occurred was the failure of the front blinds on the RV.  Our coach has two large, electric roller blinds on the front windshield.  The solar shade - a semi transparent blind, fell as we were lowering them at the campsite.  We noted then that the night shade - the opaque shade - was off its roller.  Holding it we could roll it up and down.  The solar shade was beyond home and with a couple of cable ties (every RVer should have a bunch of these) we tied the blind up and out of the way pending repair.

Even though we were somewhat discouraged by the 128 road, we put Manchester KOA on the return visit list.  But we remained convinced there has to be a better way to get to Mendocino and Fort Bragg.
Posted by Jerald at 3:45 PM No comments:

A rare 3 day weekend cropped up so we buttoned up the RV, made reservations for a tour of Hearst Castle and took off after work.


We wanted to shake down the boondocking systems so we had no reservations anywhere and just took off.


That's why you have RVs right?


So after work, we took off, headed down I-5 till about 10:00 and then started looking for a place to spend the night.  Shortly, we pulled through the roadside rest just as a truck was pulling out.  So we slipped into the spot he just vacated and settled in.


On I-5 the  roadside rests all have signs saying "No Overnight Parking".  That was a bit puzzling since the whole purpose of the roadside rest was a chance to give sleepy drivers a chance to get some sleep.  Caltrans own websites say it ok to stay 8 hours out of 24.


So whatever.  Depends on your definition of overnight.


We only put out the passenger side slides so we could stay within our parking space - which happens to be the side that includes the bed.  Walked the dog and off to bed we went.


It wasn't bad.  Trucks are noisy, but it wasn't unbearable.  The worst noise was the motorcycle club that came through in the morning.  We could hear the steady drone of the reefers, but truckers apparently don't like leaving their trucks idling for extended periods of time like they used to.


It was that night, about 4AM, we experienced failure of the 12V electrical system.


When we first pulled in, we set the Genset to "AUTO" and it kicked on and off as expected.  But when we went to bed we turned the Genset off so we wouldn't have to hear the genset while trying to sleep.


We have the "residential" (aka non-fire starting) refrigerator.  But with that refrigerator we also got a impressive set of batteries that should be able the refrigerator for at least 1/2 a day.  Apparently during the night the battery went below "LBCO" and the invertor kicked off, leaving us without any 117v power.

Ok, manageable issue - maybe I did something silly to kill off the charge.

From I-5 we drove over to the coast near Cambria and up highway 1 to San Simeon State Campground.  Our line of thinking was that since California was in serious drought and the water had been cut off to this campground, it would be sparsely used.

We drove up to the campground and asked the ranger manning the booth if there was room and he said "Sure.  How long is your rig?"

Since California State parks have a 35 foot maximum our rig magical shrunk 2 feet.  I could see  a 40 footer in the upper camp ground.

The sites were very nice albeit no water, sewer or electricity.  Quiet hours (no generators) were 10-8.  We discovered that night the batteries would not even cover the quiet hours.  Ok - there is a problem there.

We took the toad to the San Simeon visitors center just down the road.  Extremely interesting, extremely nice.  Highly recommended.

Battery Epilogue
After the trip the batteries continued to deteriorate.  We took it camping world and in two minutes they pronounced the batteries dead.  We took it home and orders 4 top of the line Exide AGM-2 batteries at $1200.00 from the local auto parts store.

We don't know the root cause.  I did find the magnum invertor was set for "flooded" batteries - that might be the cause.  In any event the invertor is now set for AGM-2 and we are nervously watching those batteries.