Location:  4301 Rochambeau Dr.  Williamsburg, VA  23188Sewer:  MostWater:  YesPower:  50ACable:  YesWIFI:  Very Good. Fast enough to stream. Cellular:  T-Mobile:  Comments:  Some spots are bit short and some are uneven.  Very nice RV resort.
September 2021
Other Thousand Trails should follows this parks example for maintenance and cleanliness.  We were quite impressed with this park.  The pools (indoor and out), the spa, the minigolf and the other facilities were immaculate.  Water pressure was good and the EMS had no issues with park power.
The staff here is very accommodating and arranges weekend programs for children and adults.
The sites can be bit short and not totally level, but we had no problem in our 38foot Class A.   Satellite can be difficult due to the trees.  We managed to find to clear spot to aim the dish.
There are a lot of seasonal RVs and Cabins here, but we had no problem getting in after labor day in a fine site in Section C.
The Thousand Trails is located on the edge of the Historic Triangle of Williamsburg, Yorktown and Jamestown.   This is an excellent jumping off space for these  historic adventures.
Posted by Jerald at 7:41 AM No comments:

We left Kenisee Lake Thousand Trails traveled along lake Erie to upstate New York and stopped in a KOA in Medina, New York.

This was unusual for us.  We very seldom stay in KOAs since they seem to be vacation resorts that have and do a lot of things we don't necessarily want.  KOA are also mucho dinero.   This one was no exception.  It was very nice and we enjoyed the park, but it really was setup for families with kids on vacation.

While exploring the area, we discovered Golden Hill State Park on the shores of Lake Ontario.  In the future when we travel to this area, we will stay there rather than the KOA.

This is near the Eire Canal and we spent a fascinating day exploring the locks and canal museum in Lockport N.Y.  and took a ride along the canal in a paddle wheeler.

The primary reason to stay in this particular area was to hook up with family in nearby Rochester NY.  We did so and had a very pleasant evening with them.  Thank you Wyatt and Jess.

We stayed a couple of days and then headed out along Lake Ontario towards Niagara Falls.

We stayed a little bit out of Niagara Falls in a little town of Grand Isle at the Cinderella Motel and RV park.  This worthwhile institution is a small, family run semi-residential motel with a full hookup RV park in the back.

Niagara Falls has two sides:  American and Canadian.  We elected not to enter Canada due to Covid Restrictions (it was possible, just a hassle) and visited the Niagara Falls State Park.  Unfortunately a restaurant where we wanted to eat at the Falls was closed due to "Lack of Inventory" (supply chain issues?), but the rest of the falls was open.  We did both Cave of the Winds and the Maid of the Mist tour.

The cave collapsed in the 1930s.   So what the state did was build an elevator and a set of platforms near the base of the falls (on rather rickety looking 2x4s) for tourists to get close to and sprayed by the falls.  Sprayed to the extent that they give you a poncho and a set of flip-flops to wear on the excursion. 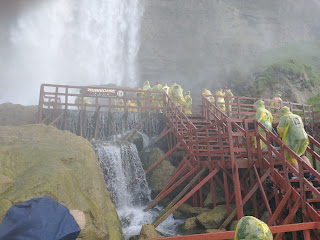 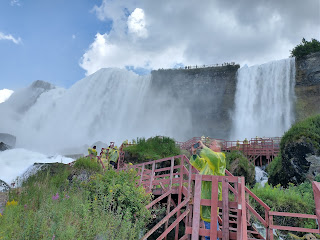 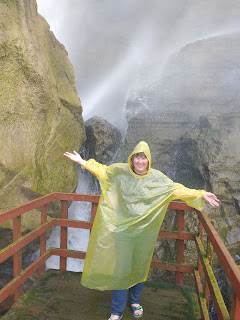 We thought the money spent on the experience was well worth it.

We also took the Maid of the Mist boat trip to the foot of the falls.  This is also a traditional Niagara Falls thing.  The boat also issues ponchos. 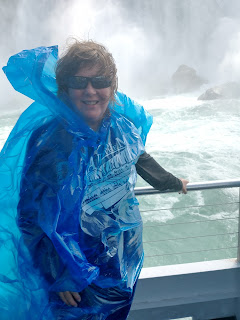 We thought this was also worth the money.

One thing they do not really advertise is the free Niagara at Night light show.  Probably because they don't have to. 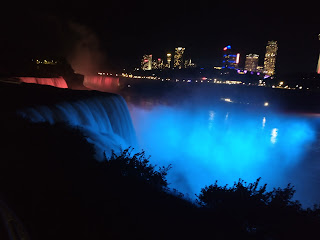 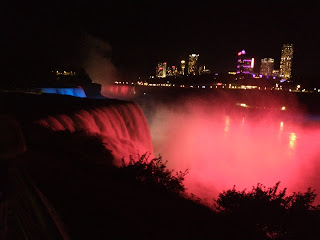 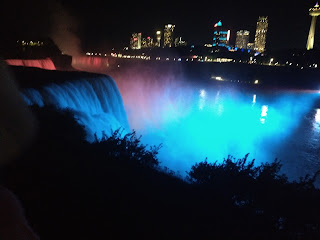 We only spent a couple of days in Niagara, but it was certainly eventful.  We are planning to go back someday.

Posted by Jerald at 5:11 PM No comments:

Location:  492 S. Mt Pleasant Rd, Lebanon, PASewer:  AllWater:  YesPower:  30A/50A In all spotsCable:  NoneWIFI:  Available at extra charge. Cellular:  T-Mobile:  Comments:  Very beautiful RV Resort
September 2021
This is a high end RV resort located outside of Hershey PA.  It is somewhat rolling, but the sites were spacious and level.
There are large green areas surrounding a small catch and release lake with immaculate pool, spa and tennis (pickle ball) area.
When we were there, they were preparing for the winter and had covered the pool.  The indoor spa however was open and warm.
The park is within an easy driving distance of the Hershey Park area and Lancaster with its Ahmish population is nearby.
The staff was extremely friendly and accomadating.
We highly recommend this park and the nearby attractions of Hershey and Lancaster.
Posted by Jerald at 7:06 AM No comments:

Location:   180 Knight Road, Gettysburg, PA 17325Sewer:  Mixed.  Most site appear to have some sewer.  On-site holding tanks on some.Water:  YesPower:  30A/50A (we had 30 only)Cable:  SomeWIFI:  Available at extra charge.  Fast enough to stream.  Free at the lodgeCellular:  T-Mobile:  Pretty GoodComments:  Very close to the battleground.
August  2021
First off, this is a trails collection campground.  This means that they are primarily a public (rvonthego.com) campground that reserves some spots for Thousand Trails members.  It is on a hill side - not the famous civil war round tops - but nearby.  If you are a civil war buf, this place, with is close proximity to the National Museum, can't be beat.
It is fortunate it is on the hillside.  We arrived in the midst of the Hurricane Ida aftermath and some of the other local Thousand Trails were closed due to flooding.
The close proximity to I-15 made for more noise than usual.
It appears that most of the spots are occupied by seasonals.  The place kind of fills up on the weekend empties during the week.
The pools and grassy play areas are very well maintained are are quite inviting.  The sites, by and large, were quite nice, but there were some - possibly retired and no longer used - that fell into the category of "you expect me to park in that?".   In our site for example, we believe it was a vacated annual site, the sewer connection was quite strange and required a trip to a hardware store to purchase some rubber sewer adapters.
Posted by Jerald at 4:54 AM No comments:

Email ThisBlogThis!Share to TwitterShare to FacebookShare to Pinterest
Labels: thousandtrails

Location:  2021 Mill Creek Rd, Jefferson, OH 44047Sewer:  AllWater:  YesPower:  50ACable:  NoneWIFI:  Available at extra charge.  Fast enough to stream.  Free at the lodgeCellular:  T-Mobile:  Marginal is some parts. Comments:  Very beautiful RV Resort
August  2021
Note:  This is a seasonal park, closed in Winter.
This is a very beautiful RV Resort outside of Jefferson Ohio.  Unlike many Thousand Trails the upkeep here is perfect.  It has on site fishing lakes, boats available for fishing and massive green areas for walking, playing etc.  The playgrounds are modern.
This park has a majority of seasonal sites, so getting in can be difficult during peak periods.
The sheer beauty of this RV resort can't be beat.  We were so struck by it, when we pulled in we instantly got on the computer and extended our stay.
If there is a problem with Kenisee Lakes it is that there is nothing really in the area.  The area has tried to up its tourist value by building modern covered bridges which are, well... ok.  There are a couple of state parks on the nearby Lake Erie, but they are dog hostile and therefore did not get a visit.
Cleveland, with the Rock and Roll hall of Fame is a bit of drive away, but was surprisingly worth a visit.
Posted by Jerald at 4:38 AM No comments:

Email ThisBlogThis!Share to TwitterShare to FacebookShare to Pinterest
Labels: thousandtrails

We decided we were driving too much and took a 10 day stand-down in St Clare Michigan at a Thousand Trails just outside of the town.

We needed it.  The rig had racked up the need for a number of minor repairs and we were very tired.  The stop at the Thousand Trails gave us time to rest, get the rig repairs done (all DIY) and to do some local sightseeing.  We also used St. Clare as a general delivery address to get our mail forwarded to us.

We were close to Port Huron, so we went over there and took a lake/river tour on a boat out onto Lake Huron.  Walking around the beautiful town of St. Clare with it's river front boardwalk was also a very highly thought of activity.

We took a trip (quite a distance) to Frankenmuth, which we think is German for "Tourist Trap".   It was worth the trip just to see the the town and to enjoy their little river cruise on a stern wheeler.  They allowed our dog Ginger as a passenger - though boats are not Gingers favorite thing. 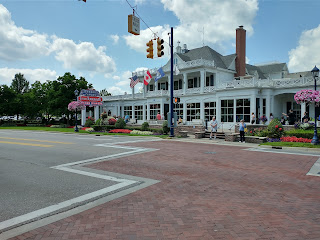 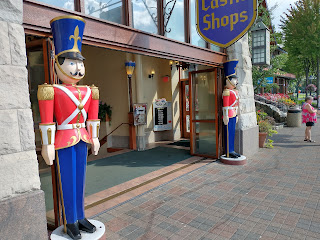 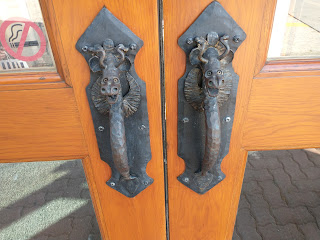 This is first place in Michigan we thought was over-priced.  I guess the Disneyland like experience is expensive.

Fully rested and repairs on the rig complete, we left St. Clare and proceeded along I-90 with a goal of getting to upstate New York.  We stopped at another Thousand Trails in Ohio, Kenisee Lakes.

This Thousand Trails is notably simply for beauty of park.  A lot of Thousand Trails are...ummm..rustic.  That is needing work to modernize or restore the amenities that are getting worn.

That was not the case with this one.  Everthing was in pristine condition, with the grounds well maintained.

We pulled in and did something we had never done before:  we extended our stay just as we checked in.

While at Kenisee Lakes we decided to back track a bit and drive the car to the Rock and Roll Hall of Fame in Cleveland.

This was quite an interesting stop, with all the artifacts and history of the some great and some not so great musicians of the past.  It had a pretty liberal interpretation of the Rock and Roll since Johnny Cash's Tour Bus was parked out front as one of the exhibits.
Cleveland surprised us.  They apparently have done some serious urban renewal - particularly around the water front.  We were time limited (Dog are not allowed in the Rock and Roll Hall of Fame and Ginger was back at the Campground) and didn't get to explore much, but next time we are in the Cleveland area, we will.  This was a far cry from the "Mistake by the Lake" designation Cleveland used to have.
We we returned to Kenisee Lake we discovered that part of its charm is that there is nothing to do in the area.   There are some modern covered bridges in the area and some state parks by the water front, but the state parks are dog-hostile and therefore not visited by us.
We then continued our run along I-90 to upstate New York and Niagara Falls.

Posted by Jerald at 7:12 AM No comments: