Laird Hot Springs Provincial Park is one of those incredible places you hear about along the Alaskan Highway.

During the 1942 construction of the Alaskan Highway, Laird was used for rest and recuperation of the troops - who would kindly once a week vacate the hot springs so the lady service people could use it.

After the war, the hot springs became a provincial park and a stop along the Alcan.

The government of British Columbia have turned this into an incredible must-do stop for travelers along the Alcan.  They have a large number of RV sites - unfortunately dry - that are large and comfortable.  They built a beautiful boardwalk (correction - rebuilt - The GIs in the 40s built the original) that snakes out over the warm water marsh leading to the hot springs and they also build a wonderful spring side bathing facility with changing rooms benches and toilets.

There is a faint sulfur smell from the hot water as it emerges from the earth.  The hot water keeps one end of the springs almost too hot, but as you get away from the source the temperature drops to more reasonable levels.  A tradition is to wade to the hot end and put a rock on the berm next to the water source.

Anyplace else in the world, this thing would be booked up solid years in advance.  It is truly one of the special places on earth.  It's remoteness keeps it accessible.

You can get a reservation for one of the RV spots, but the park keeps a large percentage of them on a first come first serve basis.  We got there just minutes after the park filled up.

Fortunately they have overflow parking in the rest area across the Alcan.  It costs the same as staying in the Park and it is one of the few rest areas on the Alcan that does not permit overnight parking otherwise.

So we paid our $28.00 Canadian and parked in the overflow.  But the next morning we were first in line and got a very nice back in spot.

All spots are dry - there was one water tap and a hand pump (really) for potable water.  There was no sanitary dump.  The rest rooms were all outhouses.

We think this helps keep the place accessible.

Liard will get another visit on our return to California - and anyother time we are on the Alcan.

Posted by Jerald at 8:50 AM No comments:

After Seaside, we moved to a non descript campground just south of the Canadian Border and did a couple of practice entries into Canada.  One of which was to Victoria on a fairly expensive car ferry.  We also scouted our port of entries settling on Abbotsford a few miles down the road.

On July 2, we made our RV entry into Canada - after a bit of panic where we thought we would not fit through the barricades of the entry station and made our first stop about 1/2 a mile into Canada at Costco.

There we learned Costco in Canada does not take the same credit cards.  We found one that worked for gas and hit an ATM to get Canadian money to pay for our groceries.  It was then onto BC-97 for the run up through Prince Rupert to Dawson Creek and milepost 0.

We overnighted in Dawson creek to recover a bit from the long run up BC-37 and to get some dog treats (she needs very special treats) and then headed out on the fabled Alaskan Highway.

We knew that it had long since been completely paved (thank you Canada) but were surprised by the quality of the highway.

Our first destination was Laird Hot Springs and the provincial RV park they have there.  We planned on spending 2 nights at Laird to both enjoy the natural hot springs and the rest up from the long drive.

The British Columbia Highway Department keeps to foliage along the highway trimmed back 20 or more yards and there is a very good reason for this.  The animals.

We were astonished at the number of large animals we saw alongside the road.  You needed to clearance to see the animals and to slow down to allow them to cross - or as the case may be - take pictures: 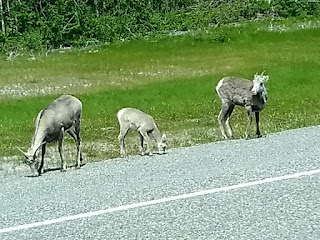 We overnighted in a "rustic" (self described) campground in the remote Tetsa River area.  It advertised hookups.

Well the hookups were a tee off of a garden hose and a 15 amp extension cord stretched into the campsite.  We went ahead and took the water, but decided to decline the electricity.  It was being provided by a local diesel generator and didn't sound terribly healthy.

The rustic campground was more than made with the Cinnamon Buns from the camp office the next morning.  The Milepost claims they were "said by thousands" to be the best there ever was.

In the future we will stop for Cinnamon Buns - maybe not to camp.

The next morning it was back on the road to Laird Hot Springs.
Posted by Jerald at 6:48 PM No comments: