Tale of the Toad Part 4: Installing the base plate

The last thing we needed to do to get the Toad toading was to install the base plate.  This is a complex thing that is best left to the pros - particularly on a Smart car where you have to disassemble a considerable part of the car.


Based on recommendations by friends (hi Bill) we chose to have our base plate installed by Eyers Hitch of Santa Clara.


We asked them to:
We also asked that we use the 7-Pin straight out from the motorhome rather than convert to a 4 wire or 5 wire cable.

Eyers did a wonderful job.  That is basically the long and the short of that. 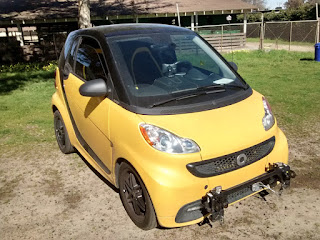 For the initial test run, we went up to the local university where we hitched up for the first time and drove around the lot with one of us in the passengers seat of the Smart.  There we learned the value of bungeeing the steering wheel - otherwise you get a violent side to side steering wheel oscillation when making turns.  We learned that most Smart tow-ers bungee the steering wheel.

Since then having the Smart under tow has been a total non-event - other than having to retrain the Smart transmission when we unhook.

The choice of a Smart, was, we think, a good one.  The car is so light, we don't even know it's there when we are towing.

Posted by Jerald at 5:29 AM No comments: