Location:  3330 Dunes Drive Marina, CaliforniaSewer:  YesWater:  YesPower:  30ACable:  NoneWIFI:  Yes - very good.Cellular:  ExcellentComments:  Best location for the Monterey Bay Area
This is one of Thousand Trails more recent acquisitions and rumor is they paid a pretty penny for it.  That is probably one of the reasons they charge a $20.00/night premium for this park.  This park is open to the general public and is apparently a Good Sam park.
We had actually tried to get into this park before TT bought it, and was told it had a 4-6 month waiting list.   We were quite surprised when it came up available on the TT website and we jumped on it.
When we arrived were diverted into a new section just south of the Resort that apparently had recently opened.  This section is out in the open visible from both Dunes drive and the nearby CA-1.  When we first saw this section of the RV park sometime ago we thought it was part of the Best Western Hotel that is right next door. 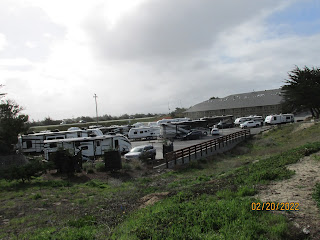 The sites in the new section are flat and paved with paving stones and include picnic tables  It is comparable to sites at high end RV resort though just a tad on the small side
The one drawback is that it is out in open, very visible from the roads and the dignificant noise from the nearby CA-1.
There are two beaches within easy walking distance of the park - One is at the continuation of the road that you turned right on the get to the park.  There were numerous hang gliders there as well as com public rest room facilities.
At the top of the road was a path to a different beach - a bit more primitive but still quite nice.  For those that have history in the area I believe (not certain) this was the site of the old Stillwell Enlisted Club for Fort Ord.
The RV park is about 15 minutes north of Monterey with all of its attractions such Monterey Bay Aquarium and some of the most spectacular coast line in California.
It is also about 10 minutes south of Moss Landing (look for the stacks of the big generating plant).  Moss Landing is home to the incomparable Phils Fish Market and Seafood house.  A number of whale watching boats are also based in Monterey.   A very interesting tour of Elkhorn Slough is also available
The city of Salinas is a slightly longer drive but well within striking distance.
There are grocery stores just on the other side of the freeway.
Because of Covid, we had minimal interaction with the TT staff and the in park facilities were closed, but they were quite friendly in the interactions we did have.
This is probably the best RV park in the Monterey Bay area, but alternatives include the Laguna Seca speedway, the Monterey County Fairgrounds and I understand there are RV parks in Carmel valley - though we have never stay in one of those.
Posted by Jerald at 8:59 AM No comments: