A new place to put the ladder and a road trip.

My, its been a while since my last post about Calistoga.

Since then we did a road trip Byrce Canyon/Zion National parks staying in Cedar City Utah. There through Las Vegas (Overnighted at Camping World Bakersfield, Circus Circus Las Vegas) and back home on the "loneliest road in America - US Highway 50 overnighting in Walmart in Fallon Nevada. 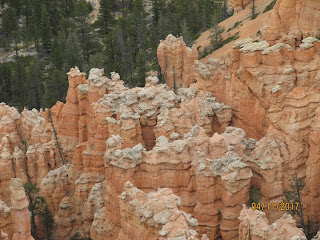 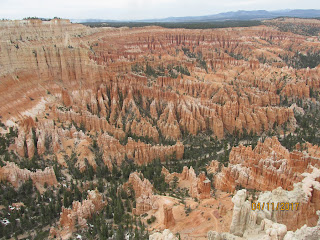 The "loneliest road" is certainly.  Especially when you have 50mph cross winds and snow.  The positive thing about that was that the RV handled extremely well - we were not even aware of the severity of the wind.﻿

We've also relocated semi-permanently to Sacramento California.  We found a spot inside a 55 and over Mobile Home park in Citrus Heights a Sacramento suburb.  About 40% of the rent for a parking place of that in the Bay Area.

One thing we learned on the road trips so far is that the tool I use the most is my ladder.  This is a Little Giant folding extensible ladder.   I pull that out just about every stop to clean the dead bugs off of the windshield.  It was, unfortunately stored in the back of a compartment and due to its size could not be moved to the front of the compartment.

So most stops I had the un enviable job of unloading that compartment, getting the ladder out and then reloading the compartment afterwards.  Something had to change.  I decided I wanted to hang the ladder on the Motorhomes aft ladder.

Shopping around on Amazon, we found a set of hook advertised to holding chairs.  However their weight rating was about 50 lbs which is lot more than the ladder.  Just to be on the safe side, we ordered two sets and put the second set supporting the lower half of the ladder.   Add pieces of a swim noodle from Dollar Tree and I've got a pretty external ladder holder. 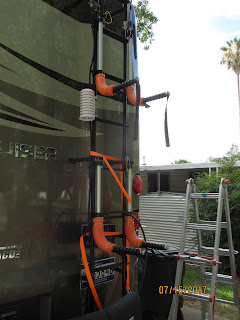 A bicycle lock keeps it secure from borrowers. 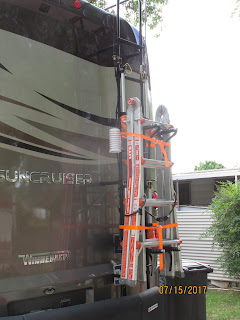 Posted by Jerald at 9:56 PM No comments: