Location:  1299 Wadham Road, St. Clair, Michigan  48079Sewer:  SomeWater:  YesPower:  20A/30A/50ACable:  NoneWIFI:  Available only in the lodgeCellular:  T-Mobile:  Fair. Comments:  Very pleasant TT near the Great Lakes
August  2021
This park is located just off of I-94 in St Clair Michigan and is home to a lot of seasonal RVs.  It is a very pleasant park, though section A is pretty close to the Interstate.
The park is older (like many of Thousand Trails offerings) but is apparently undergoing a lot of renovation.  There are signs throughout the park touting the "site upgrades" and the "exciting future amenities".
It is lush, with lots of lawn and very reasonable sized RV slots.  The lodge and pool are newer and well maintained.  A lot of the seasonals are there for the weekends only and the place has lots of kid running around.  On the weekdays it is very quite.
The staff is what makes this a notable ThousandTrails.  They seem to be very focused on providing a memorably stay for their quests.
While we were there, amongst many other things, was live music (two nights), a car show and most importantly, donuts on Sunday morning.  During the live music shows, a TT staff member dressed up a Big Foot and kept the kids amused while the parents enjoyed the music.
We were also surprised at the improvements that the seasonals did to their sites.  It is obvious that some of them had been there many years and were planning to be there many more.
Full hook up sites are a bit rare due to the large number of seasonals, but they are obtainable - particularly if one is willing to "get on the list" and move when a site becomes available.
The nearby towns of St Claer and Port Huron are both worth a visit.
We spent 10 days in the Park and we have marked it for a future return visit.
Posted by Jerald at 8:35 AM No comments:

We entered North Dakota and promptly turned west because of our proximity to Theodore Roosevelt National Park.

The famed president once had a ranch and a hunting lodge in the park.  It is believed that Theodore became concerned about the demise of the American bison while hunting in this area and in addition to starting the national park system and started the efforts to save the American Bison from extinction.

He would be proud of the results.

While there are hiking and horse back riding opportunities in TRNP, for most folks, ourselves included, treat this as a driving park.  It is about a 30 mile loop.  While we were there the loop was partially closed due to a landslide.

The drive was well worth it.  There was a herd of bison along side the road, so we stopped-along with everyone else-to gawk at the awesome creatures.  Remembering the "Don't pet the fuzzy cows" campaign in South Dakota, we didn't exit the car.

There were lots of Prairie dog towns along side the road, we stopped to view them as well.

One of the more interesting parts of the drive was really not intended.  There are sections of the road where you can see an exposed coal vein.  At one section, the coal vein had actually caught fire - apparently due to a grass fire earlier in the season.  The park service was letting it burn out and didn't really want to hear about it unless there were open flames visible.

At the entrance of TRNP is the tourist-trap town of Medora.  This charming little town is fashioned after a movie western town, complete with saloons.  The Cowboy Hall of Fame - unfortunately closed when we were there - is located in Medora.  There were a lot of kid venues including pizza parlors and one of the best western-themed playgrounds ever built. 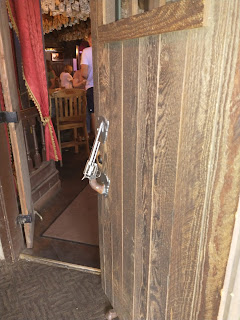 We overnighted at Boots RV park just outside of Medora.  This was interesting in itself.  This is on a working ranch where they have carved off a few RV sites.  The whole thing was totally web driven - we booked, paid and checked in without ever talking to a human.  Ginger found the plastic deer around the equipment barn to be quite fascinating. 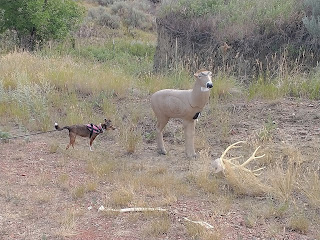 The next morning we headed out on I-90 eastward across North Dakota.  We discovered North Dakota is still pretty sparsely populated.  We weren't sure if we going to boondock overnight or what, but then we broke out the Passport America book (thanks Bill!) and found an RV park in Dawson North Dakota.  This RV park is noteworthy because you checked in with bar in front.

The RV park was ok with 50amp power, water and sewer so we disregarded the Trump Flags flying out front and checked into RV park behind the best (only) dive bar in Dawson ND.  We decided "What the heck?" and had dinner in the bar (food was good) and Jerald had his first Hamms beer since high school.  The locals were friendly and we had a great conversation with a couple of the local ranchers.

We ignored the Trump memorabilia they were selling next to the pool table.

The next day we were treated with a stop at New Salem North Dakota.  This is the home of Salem Sue - The worlds largest plastic Holstein Cow 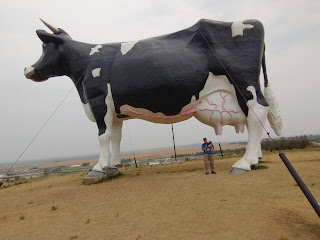 Not to be outdone by the good folks in New Salem a little ways down the road in the home town of Cowboy writer Louis Lamour, is the worlds largest concrete buffalo. 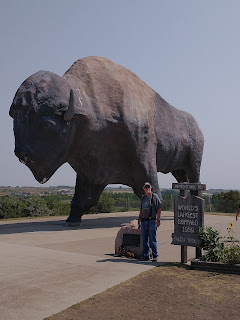 We guess there must not much to do in the evening in North Dakota.

We sadly left North Dakota, passed through Wisconsin and in the upper peninsula found a place that put them all to shame 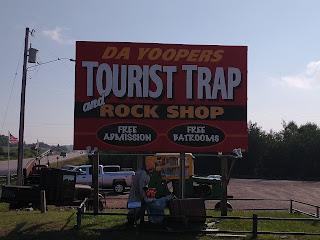 We then spent two days in a KOA just north of the Mackinac bridge in Michigan and did a day trip to Mackinac island with the dog.

Unfortunately I forgot to take the camera and we didn't take any pictures but rest assured the island expedition was well worth the effort and Mackinaw island lived up to its reputation for both it's beauty and it willingness to separate a tourist from their dollars.

At this point in our travels, we were quite burned out and decided to spend 10 days in a Thousand Trails campground just outside of St Clare Michigan.  From there we will recharge, collect our mail and figure out our next move.

Posted by Jerald at 5:00 AM No comments:

From Forest City, Iowa, we took off north and our first stop was the Spam Museum in Austin Minnesota - yes they have such a thing - and it was well worth the stop.  After learning about Spam and the history of the Hormel Company we took off on I-90 west towards Rapid City.

We overnighted at a little RV park in Plinkenton SD since South Dakota has a rule about not sleeping alongside the road for more than 3 hours.  Very nice little park - we have it marked for a return visit.

We couldn't pass through South Dakota with a visit to the infamous Wall Drugs:

We decided to spend a few days in the Rapid City are and found a spot just off the I-90 at a small RV park named "Three Flags RV park and Camp".  The whole area was getting ready for the Sturgis Motorcycle rally and we were lucky to find full hookups in the area.
We made the obligatory trip to Deadwood and Lead just outside of Rapid City.  Even a week before the rally, Deadwood was saturated in motorcycles.  Lead, however was very nice and we spent some time exploring the mining artifacts in a park that was honoring the Homestake mine - closed in the 80s and currently being used by Cal Berkeley to capture neutrinos.
We then drove back from Rapid City to the Badlands National Part.  Among other things they have restored a fairly large buffalo herd there.  The rangers there have an ad campaign;  "Don't pet the fuzzy cows", we didn't quite understand why until we saw this:

The next day was "Four Presidents and a Chief": 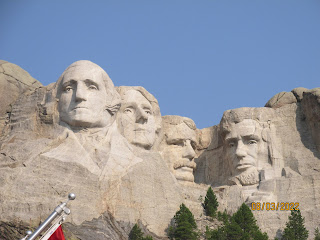 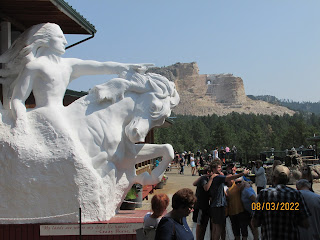 Despite it being "done to death", we would heartily recommend to anyone that they go visit both Mount Rushmore and the Crazy Horse memorial.
We spent a day exploring the downtown Rapid City area.  The downtown has a bronze statue of all the president up to Obama.  They haven't gotten their Trump statue yet - we believe there is a shortage of orange bronze.
The last day in Rapid City we decided to go to Wind Cave national park.  This park offers tours of the Wind Cave - a massive cavern complex about 230 feet below the surface.
We left Rapid City the day the Sturgis Motorcycle rally started in nearby Sturgis.  Our route (curse you GPS) .  We were totally amazed by the number of Motorcycles parked along main street in Sturgis.  So amazed we forgot to take a picture and turning the 37ft Motorhome around in city full of motorcycles was not practical.  This shot happened on our way out of town: 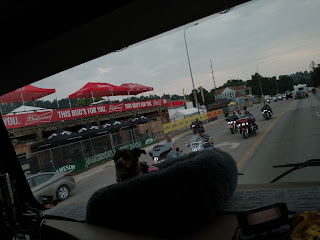 Ginger was not impressed with the motorcycles.
Conclusion:  We would have stayed in Rapid City longer if there was RV space availability.  As it was the RV park we stayed at - outside of Sturgis - was fully booked for Sturgis.  There was a lot more to do there.  We have already decided to return when there aren't 700,000 people at a Motorcycle rally.  We would really like to explore Deadwood and some of the other places we missed on this trip.

Posted by Jerald at 7:23 AM No comments: