After leaving Hershey, we traveled to Williamsburg Virginia and stayed at the Thousand Trails just out side of Williamsburg.  Williamsburg is also known as the Pancake House capital of the world - for good reason.

We went there for primary reason of visiting Colonial Williamsburg, but first we got distracted by Jamestown.

There is not a lot left of the original settlement, which was moved from Jamestown to Williamsburg after Jamestown was brunt in the Bacon Rebellion.  The only surviving structure is a partial church tower.  However a number of structures have been recreated along with a very fine archeological museum.

The museum has the skull of a approximately 15 year old English girl that was cannabalized by the original settlers during a period known as the "starving time".

I observed that there was a lot of said for killing and eating teenagers....

There is an adjoining "Historical Jamestown" that has more complete re-creations, plus  number of recreated sailing ships built to the same specifications as the ships that brought the initial settlers .   The ships were much smaller than we would have imagined.

We also went to Yorktown - site of the British Surrender to the French/American revolutionaries that effectively ended the War for Independence.  We were suffering from Battlefield overload having just experienced 10 days at Gettysburg and chose to walk the waterfront in the nearby town of Yorktown rather than tour the battlefield

We spent the far majority of our time in Colonial Williamsburg.

You don't pay admission to Colonial Williamsburg - you simply park and walk around.  If you want to go into any of the shops, houses or see any of the demonstrations, a ticket is required, but to simply walk around, nothing is required.

Our first day we did not have a ticket, we simply walked Ginger around.  We did buy tickets for other days we spent in Williamsburg. 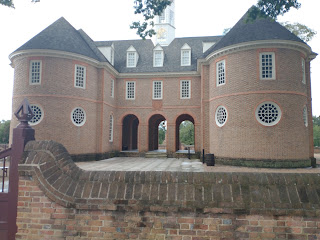 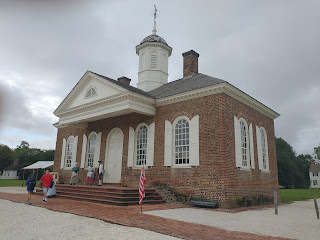 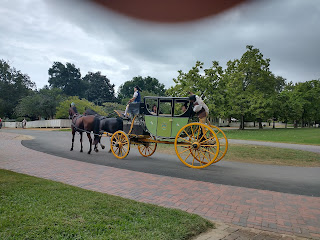 When we left Williamsburg, we had no other firm plans.  Talking it ower, we decided to go north to Washington DC and see what the capital had to offer.  I also had a long standing desire to see the Tomb of the Unknown Solder.

So we made reservations in a very expensive RV resort that was near DC and got to know the Washington Metro System.

Our first stop was Arlington  where we had the honor of seeing the changing of guard at the Tomb. 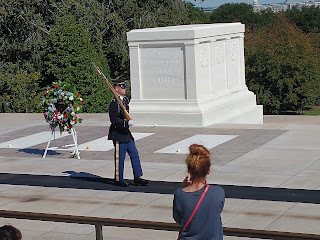 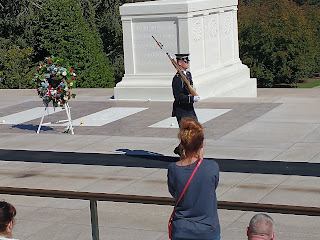 We also took a guided tour that went into DC in the evening.  Unfortunately some of the destination were having power issues. 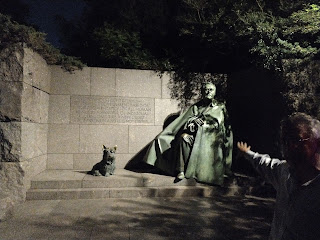 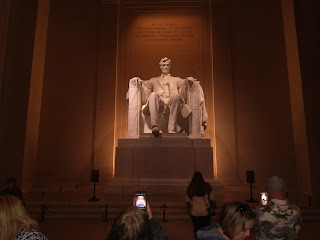 We don't recommend evening tours.
Other than waling the  Capitol Mall, we decided to focus on the Smithsonians.
There are many Smitsonians and one could spend a lifetime goring through them.  We went first the Air and Space Museum.
We also went the Museum of Natural History.  It was quite interesting, but it seemed to to directed to the younger set.
We also went into the Museum of Fine Art.  They had the Hope Diamond on display,  They also had a daVinci on display.  We had never seen one before.  We marveled at the intricacy of the painting -  there was mastery there that we had never seen before.
We spent entirely too short a time in Washington DC.  There is so much more to experience and to see.
We will be back
After Washington DC, we turned our nose westward....