After leaving Niagara Falls, we journeyed south to Gettysburg, PA, site of the famous dust-up between the north and the south.  We stayed in RoundTop campground that sadly was not on either of the more famous Roundtops.

We found an area that literally drips in history.

The Gettysburg battlefield has been mostly preserved as a national memorial site (not by NPS?) and everywhere you look there are memorials to what happened in June-July of 1863 there.  There are houses there where the homeowners mow their lawns around the stone memorials and cannons in their front yards.

Kinda of sparse on pictures - I was having camera issues. 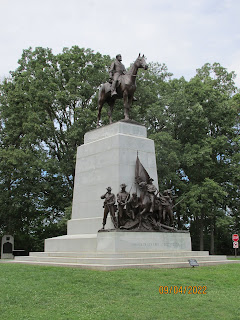 The town of Gettysburg itself has identified all the building that were standing during the time of the great battle with small bronze plaques.  Houses that played that played a significant role in the battle had signs describing what happened that day

There is a large museum there operated by the Gettysburg Foundation that along with the inevitable gift shop and snack bar has a number of interesting exhibits - including a lot of artifacts from the battle itself.  There is a movie that describes the various actions and the highlight is a restore diorama painted after the war, but early enough to have the participants vouch for it's accuracy.

The museum also offers a bus tour around the battle ground with a guide who provides a detailed description and color to the historical events. 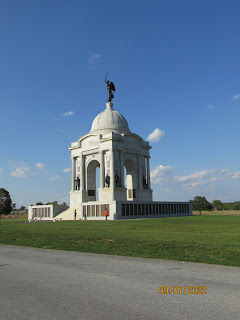 The battle was fought essentially between two ridges - Seminary Ridge for the south and Cemetery Ridge for the north.    This can be driven, but is also easily walked - much to Gingers utter joy.  There are spectacular monuments on both sides that thoroughly document the battle. We spent 10 days in Gettysburg.  In retrospect probably 5 days would have been sufficient. 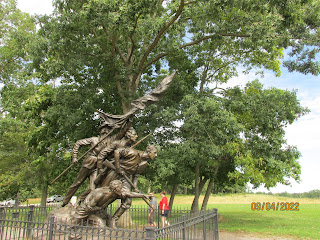